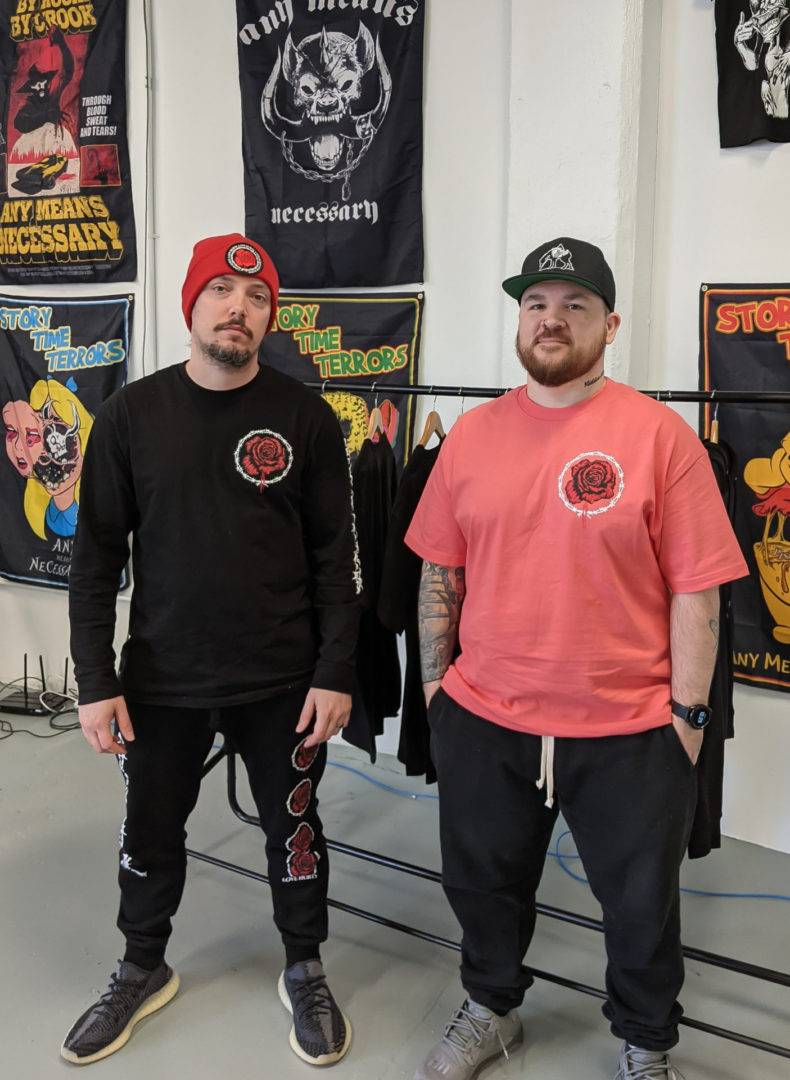 A familiar piece of advice for entrepreneurs is to never go into business with friends, but Shawn Coss and Mike Nemitz have proven that old adage wrong. Their company, Any Means Necessary, is a Bounce incubator company that sells t-shirts and other merchandise emblazoned with Coss’ artwork. Over the last eight years, they’ve incrementally grown their business, recently achieving $1 million in sales.

While the art may be unconventional, their path to success was built with hard work, grit and determination.

The two met at a concert in Kent, where Coss was displaying his art for the first time. Nemitz was recording a hip-hop album and later reached out to him to design the album cover. Immediately, Nemitz saw the potential to start a clothing line with the artwork, but Coss had no interest. At the time, he was in nursing school and working for a screen printer, while Nemitz was installing cable for Time-Warner.

Undeterred, Nemitz convinced his friend to put up $200 to make 50 t-shirts to sell at an art show at an area tattoo parlor. The shirts sold out that night, making them $600.

“I was willing to get this business going by any means necessary,” Nemitz said.

They continued to roll along – reinvesting their earnings into more shirts and other merchandise – but the business really started to take off in October 2016 when Coss submitted a series of artwork for an online event called Inktober to raise awareness for mental health.

“We donated a portion of sales from Inktober to the Treatment Advocacy Center, which develops treatment plans to address mental health issues and not just medicate people,” said Coss, whose interest in mental health stems from his nursing background.

The artwork went viral and Coss was contacted by a variety of national media outlets, including Buzzfeed and Huffington Post. Meanwhile, Nemitz was at a customer’s home installing cable as notifications kept buzzing on his phone.

As demand for the Inktober collection grew, they published the entire series in a book, which was released that November. They now also had the funds to hire a business consultant and an accountant. At this point, Coss was doing pretty well outside of Any Means Necessary – working as a nurse, creating art, contributing to a comic strip known as Cyanide and Happiness, and making appearances at various comic-con events as his following grew. Nemitz, on the other hand, was struggling. Now with a wife and two young children, he lost his job at Time Warner in March 2017. It turned out to be just the push he needed to make Any Means Necessary a thriving business.

“In between taking care of my kids, I worked until 1 or 2 a.m. in my basement filling orders. Despite the stress of losing my job, I realized I had never been happier. This is my passion,” Nemitz said.

Because neither Nemitz nor Coss have any background in business, they relied on the advice of their accountant and, for a period of time, two business consultants. They also looked at Eric Soudry, who owns Empire Ink and Empire Concert Club and Bar in Akron, as a mentor.

“Eric told us, ‘owe nothing to no one,’ so we never sought any investors,” said Nemitz. “Once we had the structure we needed, we set goals and then had a plan to execute those goals.”

In 2017, they were able to move operations out of their respective homes and lease space in a strip mall in Ellet. Online sales continued to increase incrementally through social media and the Any Means Necessary website, as Coss’ stature as an artist grew. Then the COVID-19 pandemic threw the pair another curveball.

“We lost opportunities for collaborations with Mattel and New Era hats because of COVID,” said Coss. “But we were able to pivot pretty quickly and came up with COVID-themed designs for face masks, posters and puzzles.”

Despite the missed opportunities, 2020 turned out to be the best year yet for Any Means Necessary, due in large part to an incredibly successful Black Friday online event. To increase their product offerings, they took out a line of credit to offer additional items, such as blankets and puzzles. This also gave them some money to invest in marketing on social media, including Facebook ads and finding look-alike audiences to grow their customer base. The success of Black Friday enabled them to follow Soudry’s advice and immediately pay off their line of credit.

“We’ve been able to figure out what images and content in our Facebook ads are most effective,” said Coss. “We’ve also been building our customer email list by offering discounts that drive people to our website.”

Having outgrown the space in Ellet, it was suggested they talk to Ace Epps, Bounce Innovation Hub’s director of Inclusive Entrepreneurship, about moving their operations to Bounce. Coincidentally, when Nemitz recorded his hip-hop album several years ago it was with a record label owned by Epps. In November 2020, Any Means Necessary moved to Bounce’s Next Level Business Incubator, where they finally have the space and the support they need to grow in an environment that fuels Coss’ creativity.

New releases typically go live on the first Monday of the month, and so far in 2021, each month has set new sales records. They now have two employees to help with order fulfillment.

Despite having anxiety, especially social anxiety, Nemitz serves as a mentor to aspiring entrepreneurs at Bounce.

“I tell them it’s not going to be easy and that you need to struggle to see what you’re made of,” he said.

Although their customers are worldwide and they haven’t received much recognition from the Akron community, they credit Akron with giving them the grit they needed to succeed.

Nemitz grew up in Goodyear Heights, but moved with his family to Florida as a teen. When he moved back to Akron by himself after graduating at 17, he was essentially homeless for a while, staying with friends until he landed his job at Time-Warner.

Coss was born in England when his dad was stationed in the Army there, but when the base closed, they ended up in West Virginia. He watched his parents struggle, eventually moving the family to the Akron area to take over a relative’s janitorial business. Like his parents, Coss struggled to make ends meet, working long days in a factory, as a screen printer and delivering pizzas.

He had originally hoped to attend the Art Institute of Pittsburgh, but the high tuition made that unattainable. Still, his passion for creating art continued. While his work reflects a dark humor, it has resonated with many who relate to the raw emotion. Professional therapists have purchased his artwork, which has also been used in a psychology textbook in Germany.

Coss saw nursing as a way to provide a good life for his wife and two young daughters and still continues to work part-time, but it’s Any Means Necessary that is building the life he once dreamed of having.

“The journey is more important. I want to build something that will outlast me and make my kids proud,” Coss said.

“What kept us going was each other. A business partnership is like a marriage. You have to find some you can trust and connect with,” Nemitz said. “We’re both loyal, stubborn, passionate and driven. I can’t imagine doing this with anyone else.”

They are also determined to increase their visibility within their hometown and would like to do some local pop-ups or other events, which the space at Bounce would allow them to do.

“We want to share the story behind the brand. When you tell your story, people get behind you,” Nemitz said.

About the author:
Jill Wodtley, APR, is a freelance writer and owner of Fine Point Public Relations and Advertising. An accredited member of the Public Relations Society of America, she develops and implements marketing communications, public relations and advertising initiatives for a variety of clients, ranging from health care and social service agencies to industrial/manufacturing firms.