Exploring and expanding with New Territory 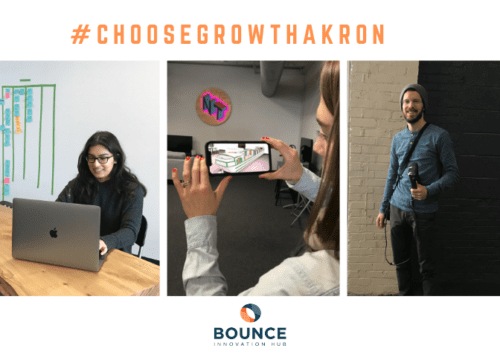 New Territory, an Akron-based startup, has always taken on new opportunities to grow.

Founded in 2017, New Territory provides one-of-a-kind virtual and augmented reality and gaming experiences to customers all over the country. Over the span of only two years, this company has set up shop on the sixth floor of Bounce; sold hundreds of virtual reality products (MERGE Cubes) through the eBay Retail Revival program and at the Northside Marketplace; created a mobile app that blends digital objects with the real world, organized numerous esports tournaments in their space and provided countless hours of fun to consumers of all ages.

Now, in 2019, New Territory shows no intention of slowing down, with the expansion of its team, the upcoming launch of an augmented reality experience at Lock 2 and exploration into new markets.

New Territory recently added Alizeh Khalifa, a recent University of Akron graduate, to the team as the marketing lead and customer success manager.

In this newly created position, Alizeh creates marketing and promotional materials for New Territory and manages the company’s social media platforms. She also manages customer relations and ensures New Territory consumers are satisfied with the company’s products and services.

“New Territory has been a terrific participant, as they truly embody the spirit of entrepreneurship, collaboration and grit required to grow a successful small business, said Chris Librie, Head of Global Impact and Giving at eBay. “We’re thrilled that initiatives like our internship program with the University of Akron’s EXL Center could help contribute to their success.”

In partnership with the Ohio & Erie Canal Coalition, New Territory is launching a virtual experience unlike any other – right in Akron.

To educate visitors on the history of canals in an engaging way, New Territory has created a 3D canal boat by Lock 2 in downtown Akron. Viewers will be able to access this augmented reality experience by downloading the New Territory app on their iOS or Android mobile devices and tablets and scanning the target image behind Canal Park. Then, users will be able explore the inside of the boat and learn more about its functionality.

The canal boat augmented reality experience will officially launch to the public in the spring, but it is currently available for viewing at Lock 2.

While business is by no means slow for New Territory, the startup is still looking to expand into new markets.

Founder Bill Myers says the team is interested in partnering with healthcare-focused organizations, led by the director of New Territory Health, Jessica Benson, as well as industrial and construction-focused organizations to see how immersive technology can meet their needs.

To further explore potential collaborations, New Territory purchased a Magic Leap One headset, one of the most innovative tools in the augmented reality market. This headset utilizes cameras, sensors, speakers and a processor to create digital worlds and images for users to see and interact with.

The team sees that products such as these can benefit potential partners – and they are willing to explore new opportunities with this technology.

Whether it is by expanding its team, creating interactive experiences in Akron or testing new technology, it is clear that New Territory is growing – right in front of our eyes.